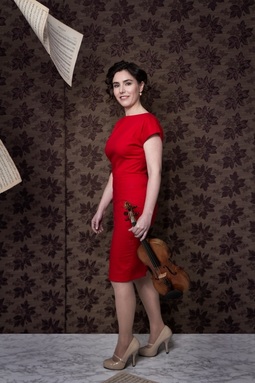 Photo: Djojo & Versteeg
The Austrian violinist Sandra Wallner is a passionate musician who plays the modern and the baroque violin. She studied at the University Mozarteum in Salzburg and at the University of Music and Performing Arts in Graz. In the Netherlands she continued her studies at the HKU University of the Arts in Utrecht where she also developed her knowledge on historically informed performance practice.
​   Sandra regularly works as a substitute in various symphony orchestras in the Netherlands, France, Germany and Austria, performing with conductors/musicians such as Philippe Herreweghe, Hervé Niquet, Laurence Equilbey, Philipp von Steinaecker, Alexander Janiczek and Giuliano Carmignola.
With the trio MERAIN (vocals, violin, harp) Sandra performs music from Ireland, England, Scotland and Wales. Together with Mieke Manschot (vocals) and Mirjam Rietberg (harp) she shares the desire to play concerts rooted both in their classical background and in traditional music. In 2015 they recorded the CD “Irish Treasures”. More information on: www.meraintrio.com.
Sandra is also specialised in teaching young talents. As a violin teacher she is associated with FluXus, Centrum voor de Kunsten in Zaandam and also gives private lessons in Amsterdam.
Powered by